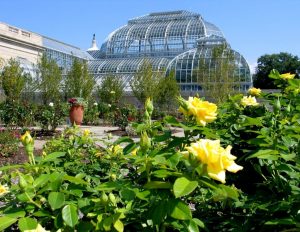 On Thursday, 23rd of June, 3rd-6th class jumped on board their coach to the Botanic Gardens and Glasnevin cemetery. Everybody was excited and plenty of songs were sang to pass the time on the bus.

Our first stop was the Botanic Gardens. Here we saw a Viking house, exotic flowers and trees and even got to roll and run down hills! At the Botanic gardens, we watched a video about plants, trees and flowers and learned that a tree leaf can be either a girl or a boy!

Next up, was Glasnevin cemetery. Our first stop on the tour was to the grave of Roger Casement and our tour guide Colette was blown away by our in-depth knowledge of all things 1916! Afterwards, we moved to Daniel O’Connell’s grave. Daniel is buried in a vault in a big tower which is 168 ft tall. The round tower was built between 1855 and 1869 to commemorate the death of Daniel O’Connell, who had established the cemetery in 1832. We also got to rub his coffin (it’s meant to bring you good luck!!!). Some other interesting facts we learned was:

One man buried in the cemetery was trampled to death by an elephant.

Elizabeth O’Farrell held the white flag during the 1916 rebellion.

A good day was had by all and we are looking forward to next years school tour!