Aboriginal art has survived for over thousands of years and continues to be one of the oldest art forms practiced today.

Aboriginal art consists of symbols. These symbols were used as a means of communication; communication of their lives on Earth, their rituals, food, customs and also to show constellations and for ritual decorations. These works were almost always ceremonial or religious. 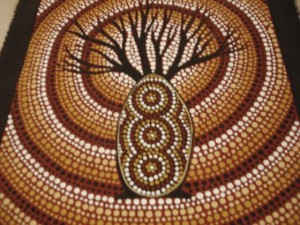 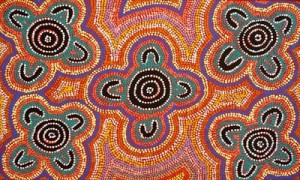 Symbols were used to show their presence of different things or objects that existed around them. These patterns and symbols were created using only colours seen in nature. Check out some of the frequent symbols that were used: 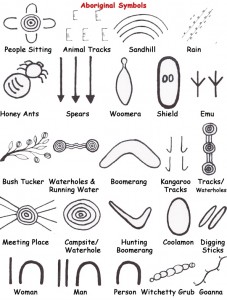 Thousands of years ago, Aboriginals would create their works using only the natural materials left around them such as bark, clay, logs, trees, burnt sticks, rocks etc.

We listened to the story of “The Rainbow Serpent” and used this story as stimulus for our art. Here is a sample of our work:

Here is a recount of the Aboriginal dreamtime creation myth involving the Rainbow Serpent:

In the Dreamtime all earth lay sleeping. Nothing moved. Nothing grew. One day the Rainbow Serpent awoke from her slumber and came out from under the ground.

She travelled far and wide and eventually grew tired and curled up and slept. She left marks of her sleeping body and her winding tracks. Then she returned to the place where she had first appeared, and called to the frogs, “Come out!”

The frogs came out slow because their bellies were heavy with water, which they had stored in their sleep. The Rainbow serpent tickled their stomachs and when the frogs laughed, water ran all over the earth to fill the tracks of the Rainbow serpents’ wanderings. This is how lakes and rivers were formed.

With water, grass and trees sprang up. Also all animals awoke and followed the rainbow serpent across the land. They were happy on earth and each lived and gathered food with his own tribe. Some animals live in rocks, others on the plains and others in trees and in the air.

The lawbreakers became stone and turned to mountains and hills, but those who kept the laws were turned into human form. The Rainbow Serpent gave each of them their own totem of the animal, bird or reptile from whence they came. The tribes knew themselves by their totems. Kangaroo, emu, carpet snake, and many, many more. So no one would starve, the Rainbow Serpent ruled that no man should eat of his totem, but only of other totems. This way there was food for everyone.

The tribes lived together on the land given to them by the Rainbow Serpent or Mother of Life and knew the land would always be theirs, and no one should ever take it from them.