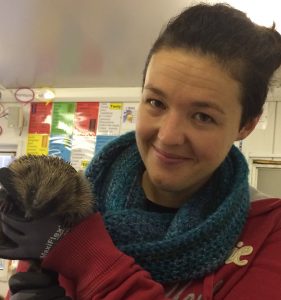 On Thursday, 26th of October, Yvonne from the Hedgehog Rescue center based in Rush came to visit our school. She cares for over 250 hedgehogs!

Yvonne brought along two hedgehogs, the smaller one was called Sonic whilst the larger one was called Leon. We were told that she has 47 hedgehogs called Sonic! But now the hedgehogs are given the surname of the person who brings them to the rescue center. We all got to pet them, luckily for us no one got hurt because when a hedgehog is scared or nervous they put out their spikes. Hedgehogs hibernate from November to March. We learnt hedgehogs have an excellent sense of smell. Hedgehogs make grunting noises and like to eat almost any insect including centipedes, snails, frogs, mice and sometimes snakes (not in Ireland though)!

Yvonne talked to us about hedgehogs and other Irish wildlife. She said even though they are called Hedgehog Rescue Dublin, they take in much more animals like foxes, rabbits, hares, badgers and birds.

We were allowed to pet Sonic and Leon. Yvonne said Leon was being released into Ardgillian on Friday with his girlfriend Martina!It is illegal to keep native hedgehogs as pets. If you would like hedgehogs to come into your garden, put cat or dog food into an upturned plastic box with a hole cut at the bottom, so hedgehogs can but cats can’t get in.

Yvonne told us a story about Leon being found after being involved in a road accident. He came to her with lots of broken bones, she told us that the vet just wanted to put him to sleep but she didn’t agree with this. One of the other vets told her there was one things they could do to fix Leon but it was going to cost €1200! So, Yvonne set up a fund on Facebook asking for help and within  an hour, it had raised over €1500! So she went in with the money and saved Leon, who now has tiny screws in his body! It was a great story to end the day, it had been fun talking to her and meeting Sonic and Leon who were very cute!

even when I’m a beginner,

so I can win all my fights,

I curl up in a ball,

When I sense something is wrong,

I have a great sense of smell,

so the insects can’t hide,

I hibernate in winter,

because their is no food to munch on,

You may think I’m dead,

But I’m curled up in my bed,

I have gentle spikes,

but not if you give me a fright,

I get kicked around,

Because I don’t make much of a sound,

And last but  not least,

Because I’m a beast!