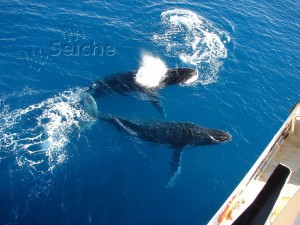 On Friday, 6th of November, a scientist and a marine biologist came to Holmpatrick National School to give a talk with 3rd-6th class about “Exploring our Oceans through Sound” as part of Science Week 2015. She told us about her job and how she did it.

Before we knew it we were raising our hands to be volunteers for her experiments. They showed us a hydrophone and placed it in a water tank. We learnt that sound become louder in solids and water. She informed us that we can hear sound, feel it and see it.  After showing us her app that shows what different sound look like, lots of lines on a screen!

Soon after these experiments she displayed her PowerPoint, which consisted of different whales and fish sounds. One sounded like a laughing granddad, while another reminded us of star wars and gunfire. After, we watched a video that showed us how a sperm whale hunts, which caught everyone’s attention.

We had lots of questions about animals under the sea. We learnt that whales can communicate all around the world by going to a special spot in the sea called the “so say channel”.   An enjoyable and very informative afternoon was had by all, resulting in a student in 6th class wanting to become a marine biologist when she finishes 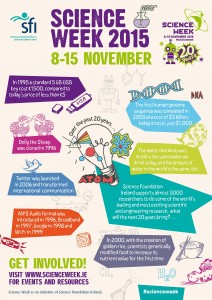