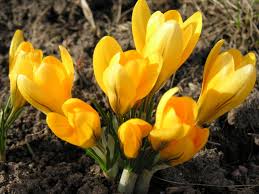 5th and 6th class were busy planting yellow crocus bulbs and daffodil bulbs in numerous flower boxes outside the school’s main building on Monday, 16th of November as part of The Crocus Project. This initiative was set up by the Holocaust Education Trust Ireland.

HETI provides schools with yellow crocus bulbs to plant “in memory of the one and a half million Jewish children and thousands of other children who died in the Holocaust”. The flowers which are a symbol of hope also serve as a reminder of the yellow Stars of David all Jews were forced to wear under Nazi rule and when the flowers bloom in late January it will coincide with the National Holocaust Memorial Day on January 27th.

The flowers remind us of the sufferings endured by so many but also that there is still beauty in the world and hope for the our future.